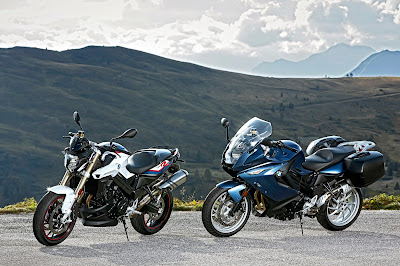 Sporty riding pleasure and dynamic touring in an enhanced form.

BMW Motorrad enhances its broad product range in the popular mid-range category by revising the F 800 R roadster and the sports touring bike F 800 GT. The BMW Motorrad two-cylinder machines have always cut a great figure – whether for urban cruising, enjoying winding country roads in sporty style or dynamic touring with a pillion passenger and luggage. This applies more than ever to the current versions, which now demonstrate further improved all-round qualities.

Both motorbikes have been adapted to the new EU4 regulations for model year 2017. The visual hallmark here is the newly designed end piece of the stainless steel tailpipe. As part of the process, the HP sports silencer by Akrapovič was also redesigned and is available as an Original BMW Motorrad Accessory.


A ride-by-wire system now passes on the rider’s commands directly from a sensor on the twist grip to the engine control system and therefore to the throttle valve. The result is even finer control and an improved response. This also allows implementation of the new standard riding modes “Rain” and “Road” for riding on damp and dry road surfaces respectively as well as the "Dynamic" riding mode to support a more sporty riding style, the latter being available as an ex-works option.


The new F 800 R and F 800 GT have an instrument panel consisting of two analogue displays for the speedometer and engine speed as before and a multi-function display. In the new model year 2017, a MIL (Malfunction Indicator Light) is provided in the cockpit in line with EU4 requirements. There are also newly designed dials which ensure improved readability, and the display has been extended to include riding mode information.

In non-metallic Lightwhite the new F 800 GT comes across as strikingly athletic and dynamic, while the Gravity Blue metallic paint finish gives it a powerful, masculine look. By contrast, the bike takes on a particularly refined appearance in the metallic Blackstorm colour scheme, combined with grey decorative surfaces on the side trim panels and the rear side trim sections.

The high quality of the F 800 GT is supported by the new model inscription in the upper area of the side trim panels which appears in a galvanised finish as a raised emblem. There is also a new windshield with matted F 800 GT model inscription that helps project a more sophisticated, mature appearance.